I grew up in Montecito and my parents still live there. Their home is safely outside the optional evacuation point, though the fire is burning only 2 miles from their home.

I found this post on Wildfire Today that has some news updates and links to Google maps.

Here is the closeup link with an updating fire map. 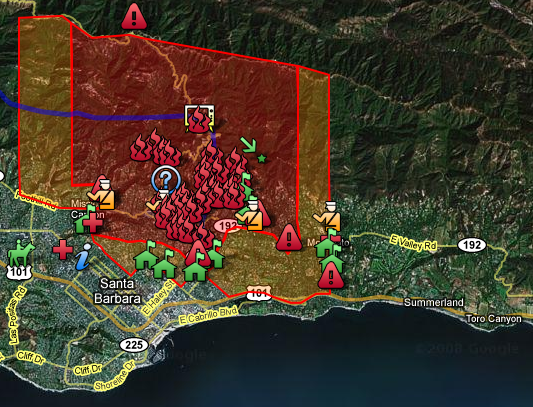 At the tail end of October, I had a chance to speak with Sumi Das over at ZDNet to talk about Technorati as part of their CIO Sessions.

We spoke for longer than the interview play time, but they did a great job editing it to keep it relevant to the series.

It was pretty cool to be able to look back on what we have accomplished in the 4 years I have been with Technorati and to be able share a little insight with those who might be interested.

I haven't seen myself on video in a long time and it was a bit freaky how much my body language made me feel like I was watching my own brother.

It's a quick watch, so if you'd like to know a little about the evolution of Technorati, give it a try.

In this episode of CIO Sessions, Dorion Carroll, vice president of engineering for Technorati, talks to ZDNet correspondent Sumi Das about the challenges with scaling operations as the blogosphere continues to grow. He also discusses how they’re able to index millions of blog posts in near real time, surviving the economic downturn and what differentiates the company from its biggest competitor, Google.